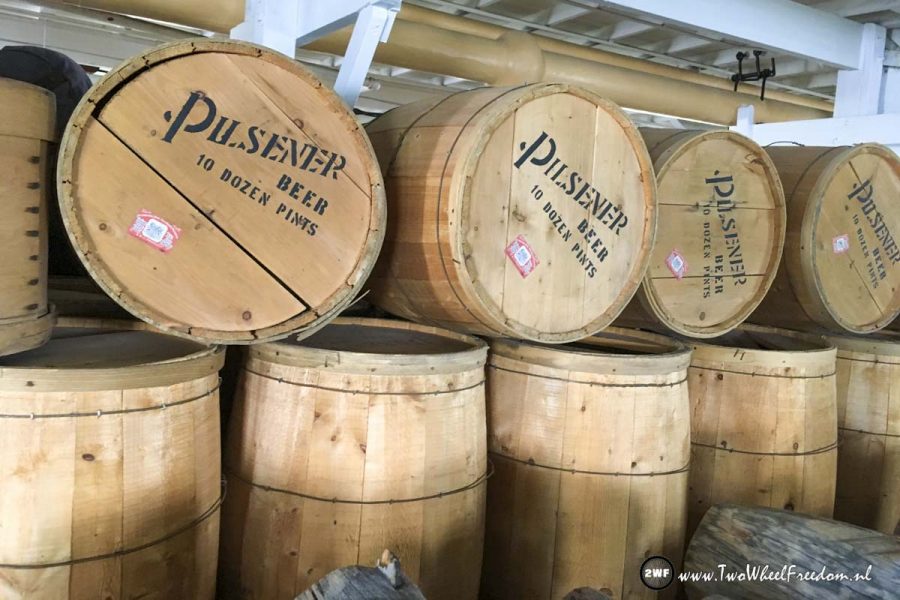 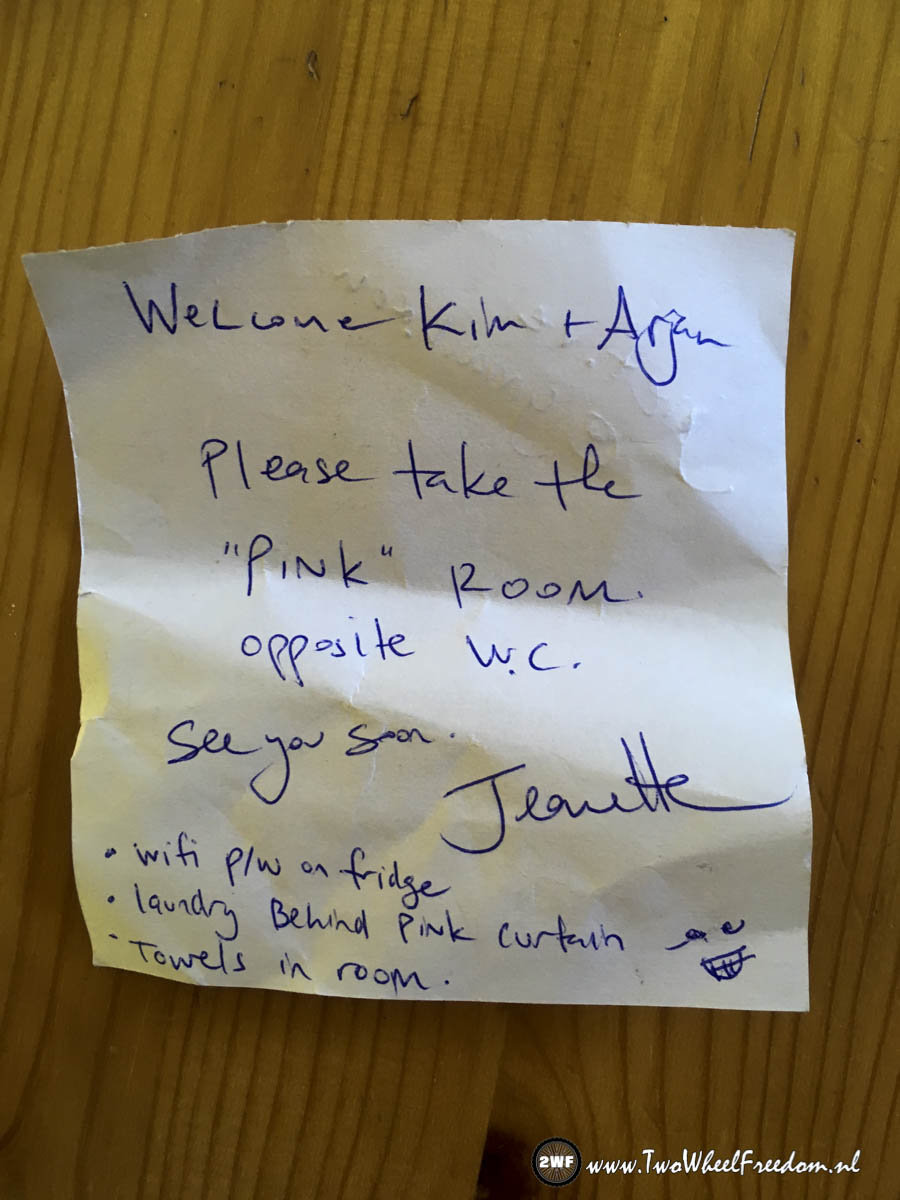 Our welcome message at Jeanettes place...

Jeanette is already up early. She baked some very nice muffins for all of us for breakfast. She is going on a hike this weekend so she already packed all her things and she will be back on Sunday late in the afternoon. In the meantime we can stay at her house. We have breakfast together and Jeanette has to go to meet up with her friend for her hike.
We are doing some laundry here first because it has already been some weeks that we have been able to wash our clothes and other stuff properly. 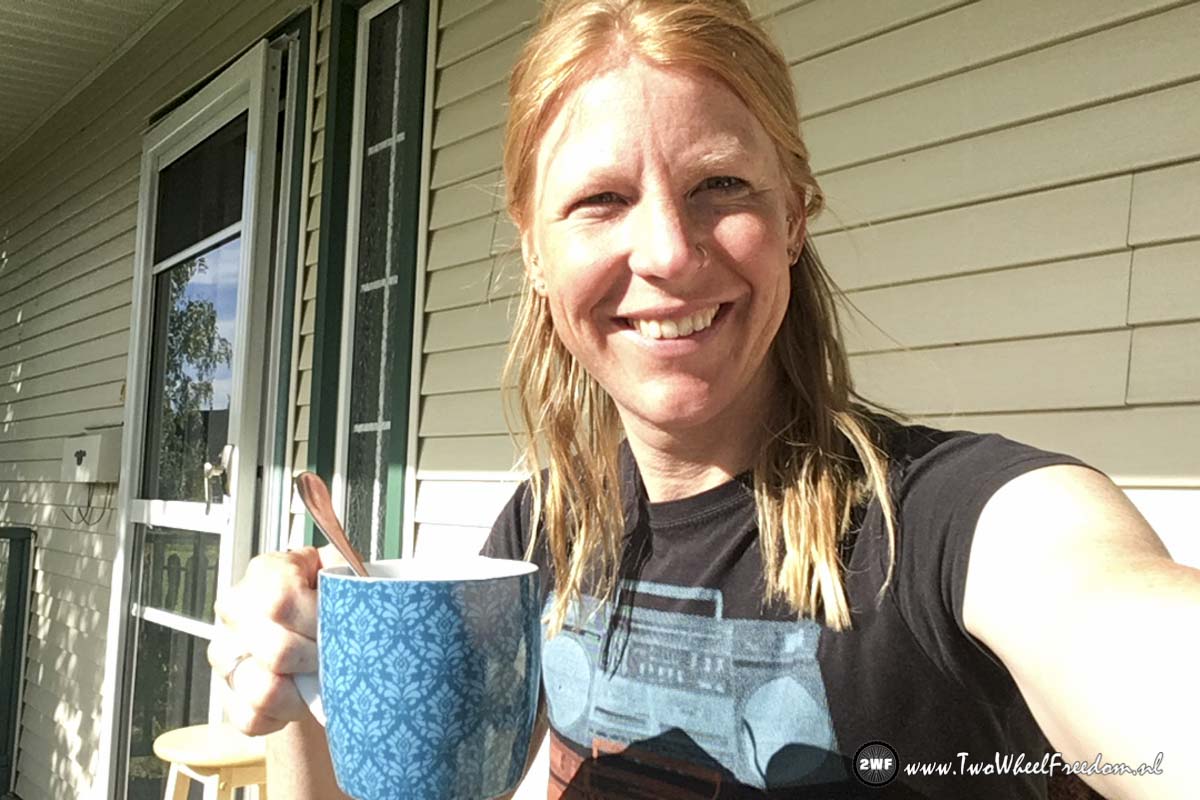 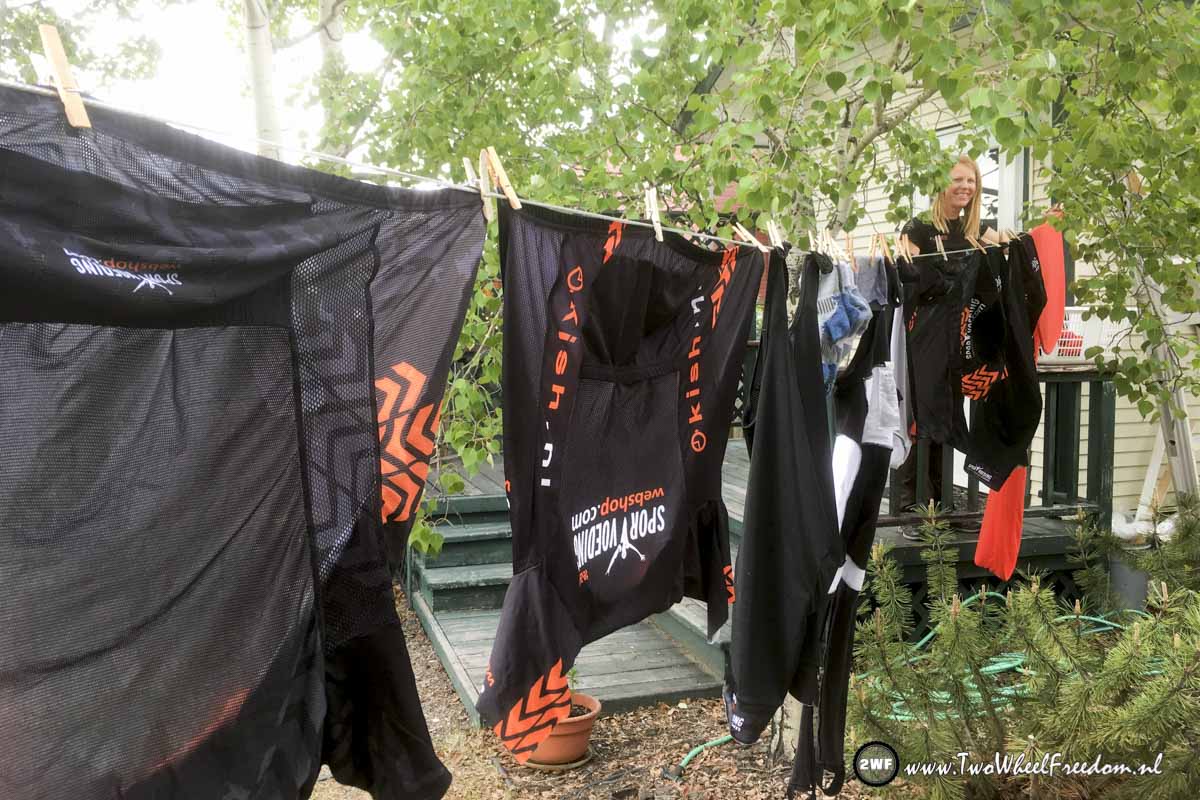 Wes is contacting Arjan that he wants to meet up with us somewhere down the road. We met Wes in Fairbanks a while ago when we stayed there. We did a hike with him,Erin (his wife) and Robin (our Warmshowers host in Fairbanks) and ate together at a local restaurant there.
He is on the road coming up from Kentucky because he had to get some things that are too expensive in Alaska even when you want to buy and get it shipped online. He decided to get it himself. He thought he could catch up with us and bring us some supplies. Since we are not on the road but in Whitehorse we decide to eat lunch together. Wes is with his cousin so that they can shift turns driving. It is a long what driving from Kentucky to Fairbanks and it is much nicer and quicker to drive with two people. We decide to go to “Klondike Salmon and Ribs Restaurant”. We thought it was a barbecue restaurant but wen we get the menu it is not to much barbecue but a lot of different hamburgers with meat or fish.The food is good though. The restaurant is also very well known here. It is nice to catch up wit Wes again and have lunch together. Than it is time to say goodbye again. We take some photos together in front of the restaurant. Maybe we will see each other again some day!

We are taking a look in some shops in the shopping centre of Whitehorse which is not very big but it’s nice and cycle around town for a bit. We see a lot of very beautiful wall paintings all over town. 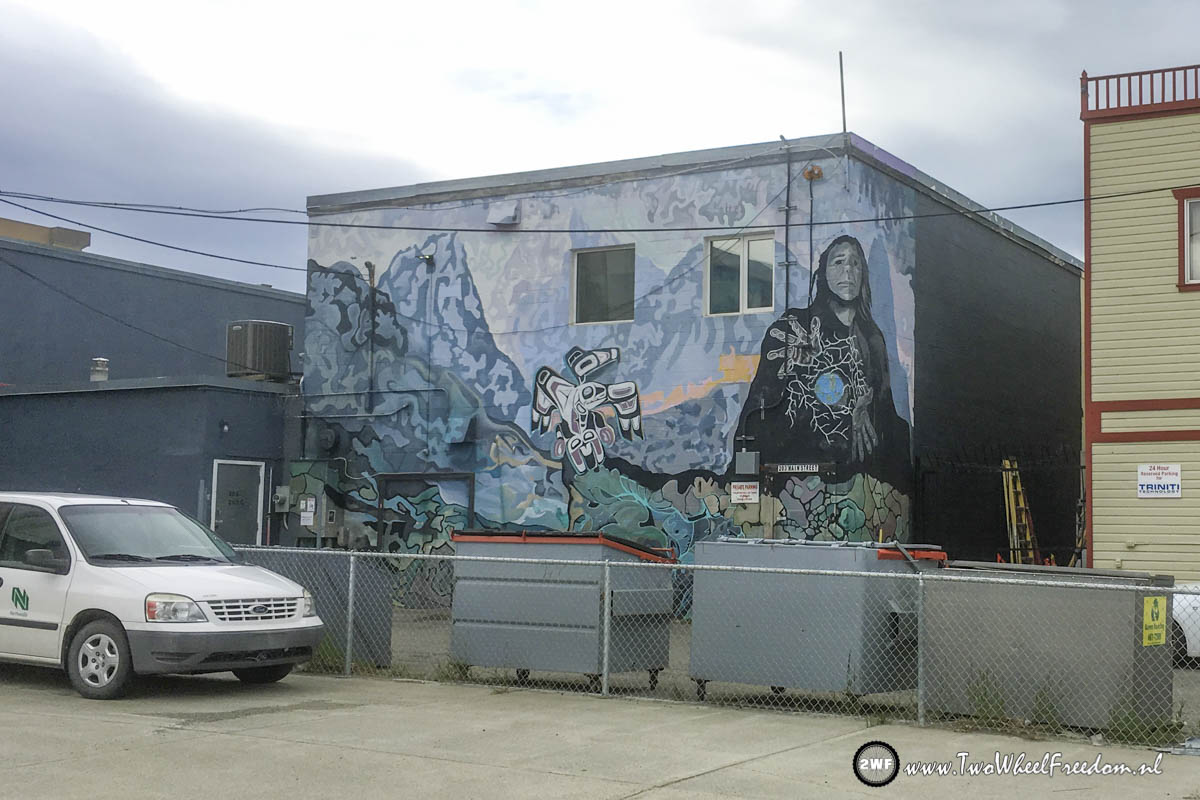 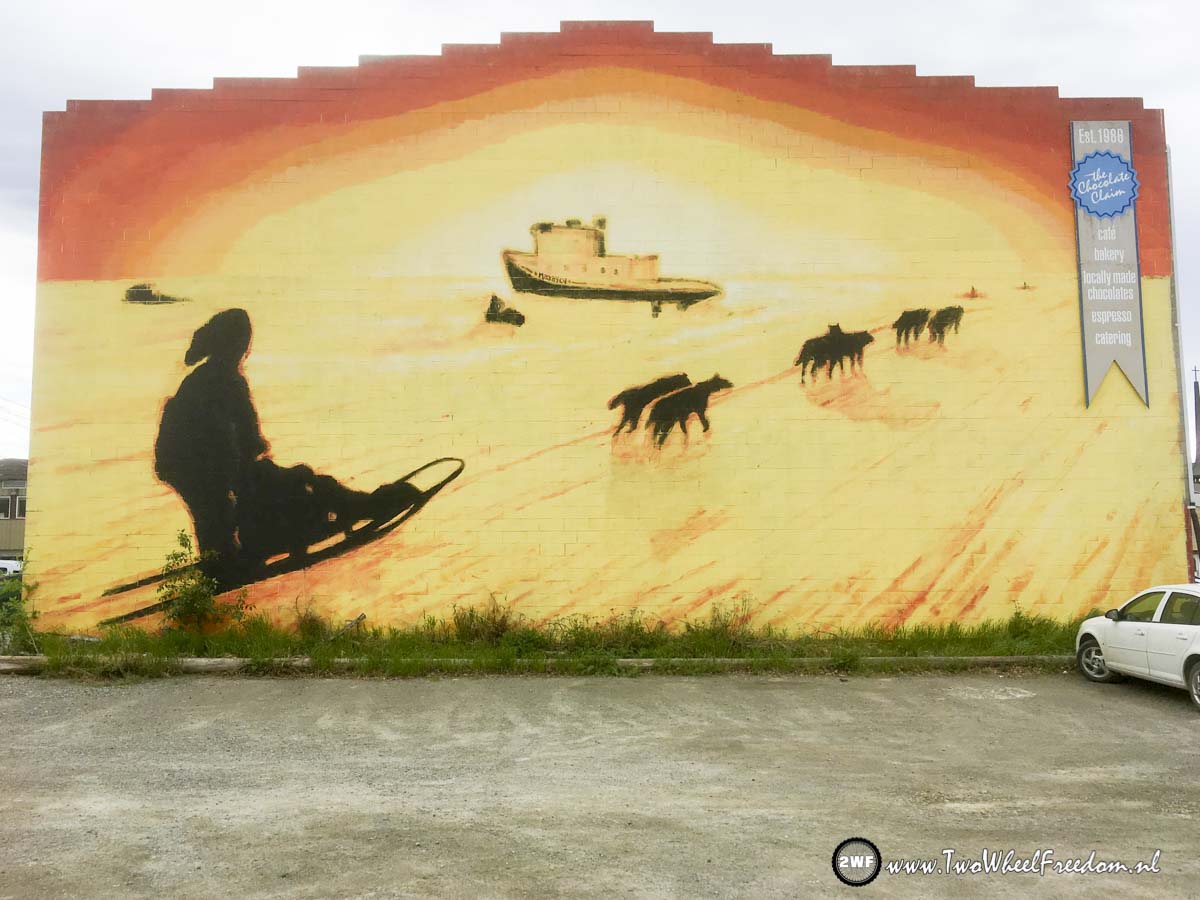 We want to go to the visitor centre here to see if we can get some extra information about the things to do in Whitehorse. When we get there we take a look around and find the information we want. We meet another cycling couple here. We saw their bicycles outside already before entering the visitor centre. They are Catherine and Pierre from France. We ask about what they are doing and they tell us that they want to cycle in Canada for two years. They tell us that they started their trip in Vancouver. They have a working permit here so they are also allowed to work. They give us some tips for when we would go on the Cassier Highway. But we will probably not go that way because we will not be able to arrive in in Edmonton when friends and family arrive there. Pierre also cycled the Alaska Highway that we are following down to Edmonton, but he likes the Cassier Highway more because it is more beautiful and much less traffic and there is more wildlife to see there. Catherine tells us about The Kwanlin Dun cultural centre. They have been there today and had a guided tour. She says they did the guided tour and she thought is was really interesting. We have plans to go there to so that is always good to know. We will find out when the guided tours are and take one of those too another day. Their website: www.cparlabas.unblog.fr
We walk around town for a bit and see some stores and get some groceries. 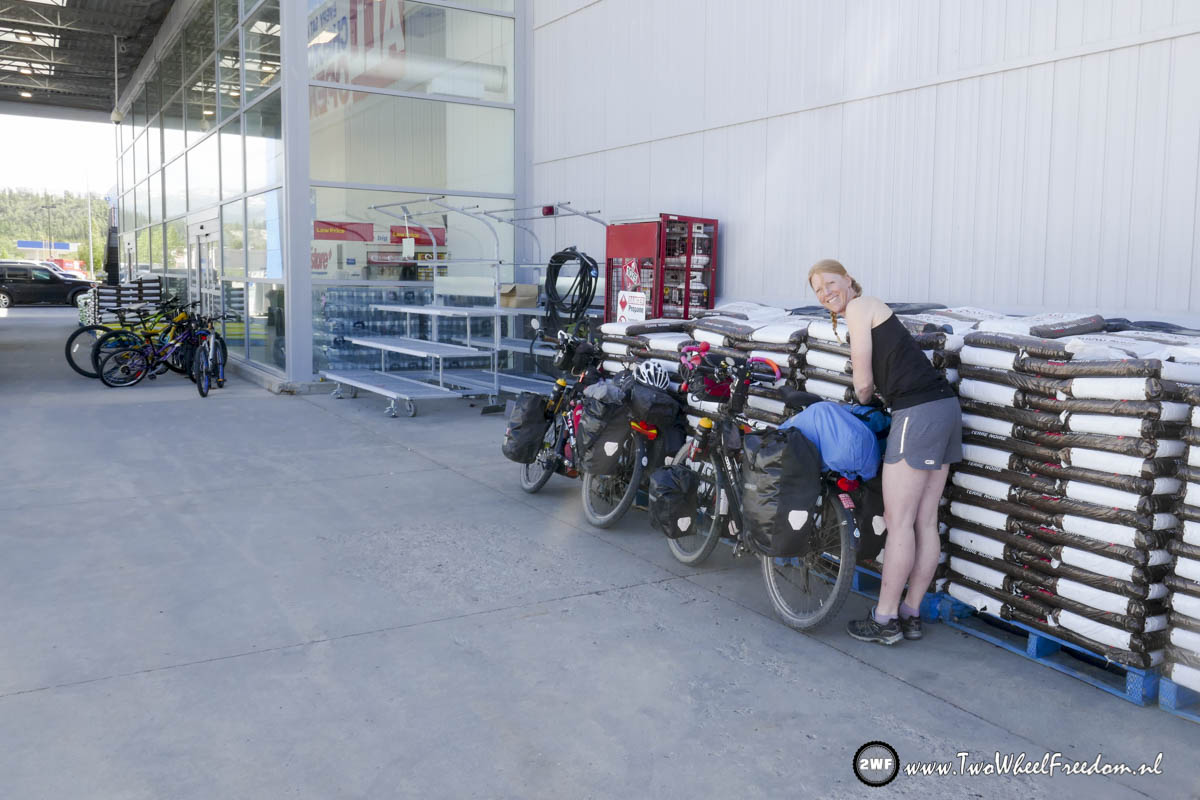 When we arrive at the house we make some dinner and decide to watch a movie before we go to bed.

We sleep till late in the morning the next day. Today it is time to work on updating our blog and Patreot page. It is nice that we are able to do that and just be inside a house. We are so used to being almost always outside that a day being inside a house is quite nice for a change. We only go outside the house to get some groceries.
Jeanette is also home from her hiking trip so it is the three of us again. Arjan is making pancakes for all of us. Nice! 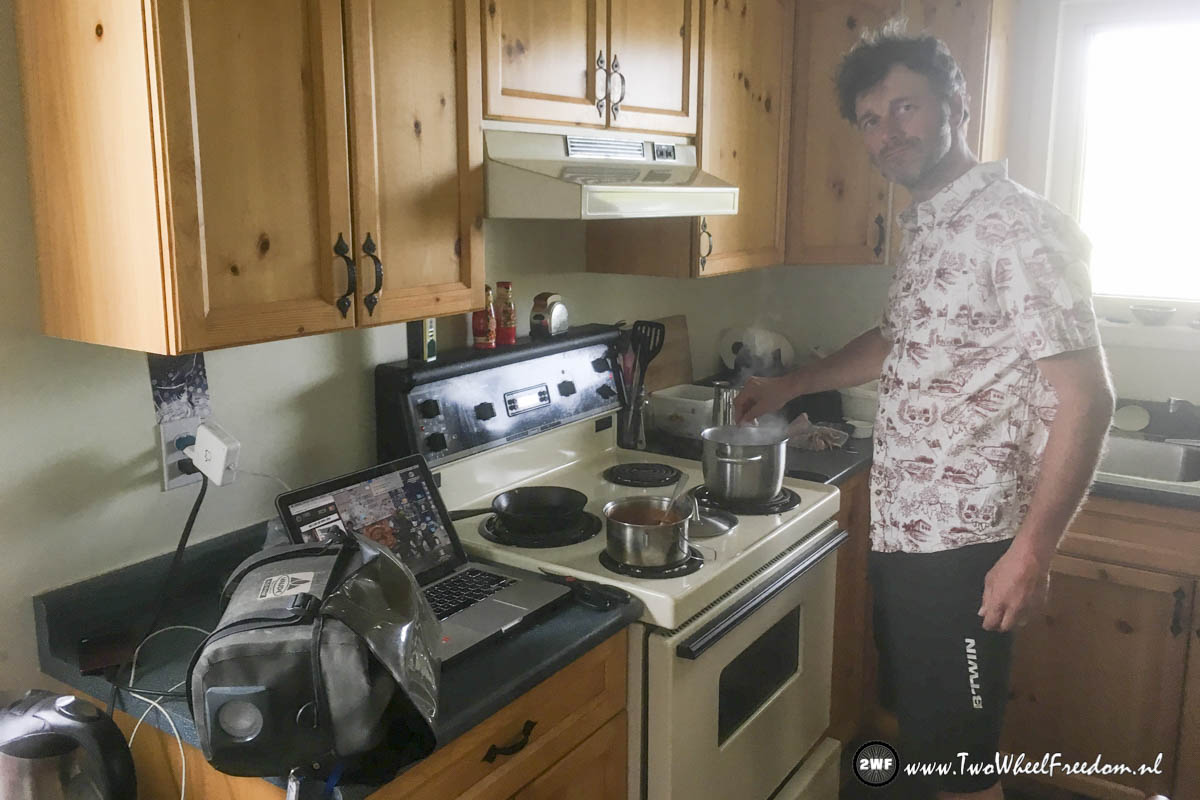 In the evening we look at the map to see what our possibilities will be for the next stretch of the road down to Dawson Creek. Jeanette tells us where we can get groceries and where there will be restaurants so that we will know how much food we will. It’s seem like again there will not be a lot of possibilities for getting food and we do not want to go to a restaurant too often, because it is will be expensive if we do this too much. So we decide to bring food for every day. That means we need to get groceries for 14 days. Again we will carry a lot of extra weight on the bicycles because of the food we need to bring.
We drink some beers and we have some nice conversations and good laughs before we decide to call it a day.

Today it is Monday so Jeanette has to go to work. We decided to go to see a shop that is called “Changing Gear” that is nearby Jeanette’s house. This shop sells all kinds of nice second hand outdoor clothes, shoes and all kinds great outdoor gear and stuff. We like this store a lot. Anything you could possibly need you might be able to find here for a much lower price. But still everything looks good, almost new.
We are very excited about it. The owner of the store tells us that they only exist for two years now. In the summer the shop is full of everything you might need for summer activities such as hiking, bicycling, canoeing, camping, climbing and so on. In wintertime, he tells us, the shop is totally trance formed into a outdoor winter activity shop such as skiing, snowboarding,
Arjan buys an extra thing for his steering and another MSR whisper light stove for when friends and family coming over at the end of July.
After this we decide to go to the Kwanlin Dün Cultural Centre, because they have guided tour on certain times of the day. We pass a nice looking bicycle shop on the way to the cultural centre and because we have a little bit of time left we take a quick look around. At the back of this shop we see there is also another shop that is actually more of a coffeehouse. It looks very nice and it is called “Midnight Sun Coffee Roasters”. We decide to come back here later in the day when we have more time to enjoy and to have a drink. 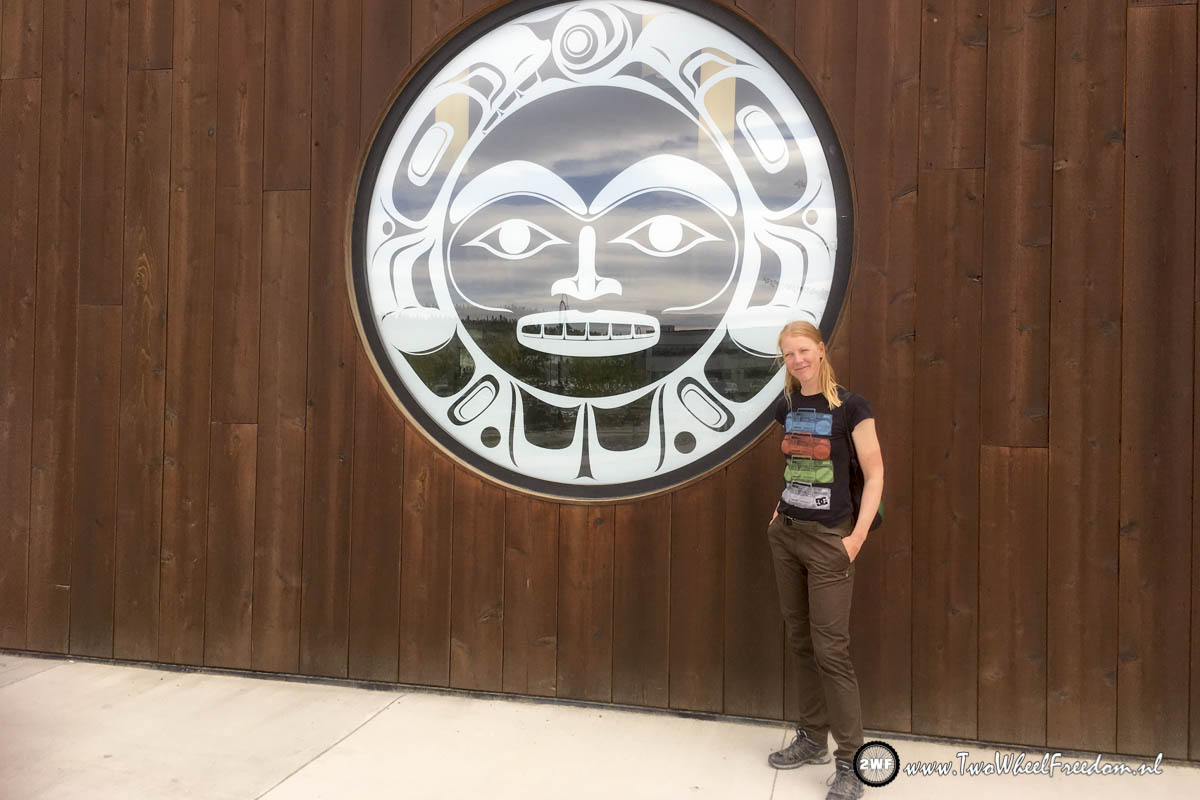 At the Kwanlin Dün Cultural Centre we only have to wait for a few minutes before the guided tour starts.
There are two girls guiding this tour who tell us that they are both original First Nation. Here in the region you are either part of the Raven or the Crow clan. This can only be passed trough the mother so when she is part of the Crow clan her kids will become Crow too. In the old days when they would get married it would be arranged that someone from the Crow people would marry someone from the Raven people. If the man would be arranged to marry a Crow woman he would go to live with her people to learn about her ways and land. His kids would be thought this way of life too. So when they are married the man would come and live with his wife and her clan.
Throughout the years the First Nation People have known a lot of oppression.
Also there are a lot of First Nation women disappeared or killed in the past and most of these disappearing and murder cases have never been solved. There are therefore still a lot of families that today still not know what happened to their daughter or sister.
Today still First Nation women have more risk of being killed than any other women in Canada and America. Why that is? That is still a big mystery.

After The Kwanlin Dün Cultural Centre we are going to see the SS Klondike. The guided tour have al just finished but for $2 we can get a folder about the history of the boat. Before we go on the boat we watch a movie that also tells us a lot about the history of the boat.
The SS Klondike was the largest sternwheeler on the upper Yukon River. The first one was built in Whitehorse in 1929 but she sank in 1936. It was rebuilt the following winter using the original superstructure and machinery that was salvaged from the wreck. The boat was re-launched in the spring of 1937 and continued carrying passengers and cargo until 1955. It was the last Yukon River sternwheeler in active service.
When we take a look on the boat we see that everything is very nice restored and they have done their best to give us a good idea about how it must have looked like in the old days. We can go on the first floor and the second floor. Here we can take a peek into the kitchen and some storing rooms. In the back you can see the on board restaurant used for the passengers. Sadly we can not take a look at the top of the boat because it still needs a lot of restoration and it will take up to five years before it will be open to the public. Still it is nice to see everything here and learn about the history. 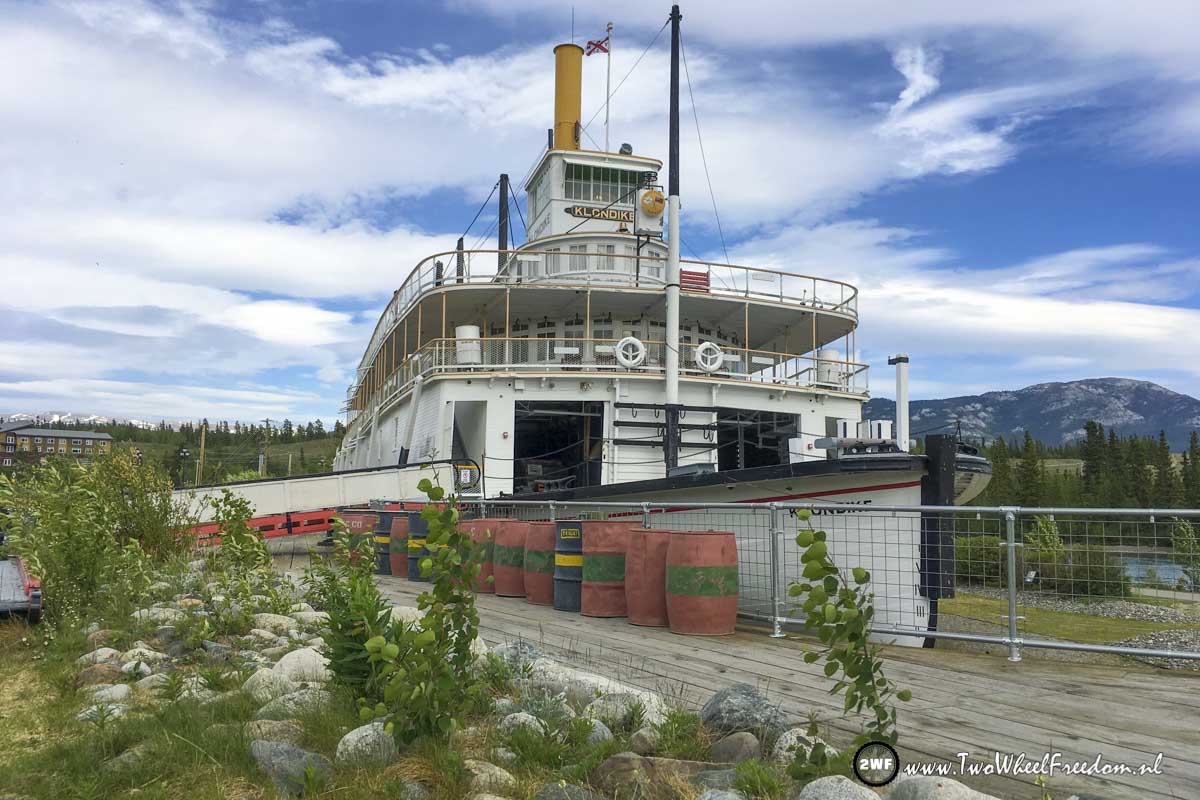 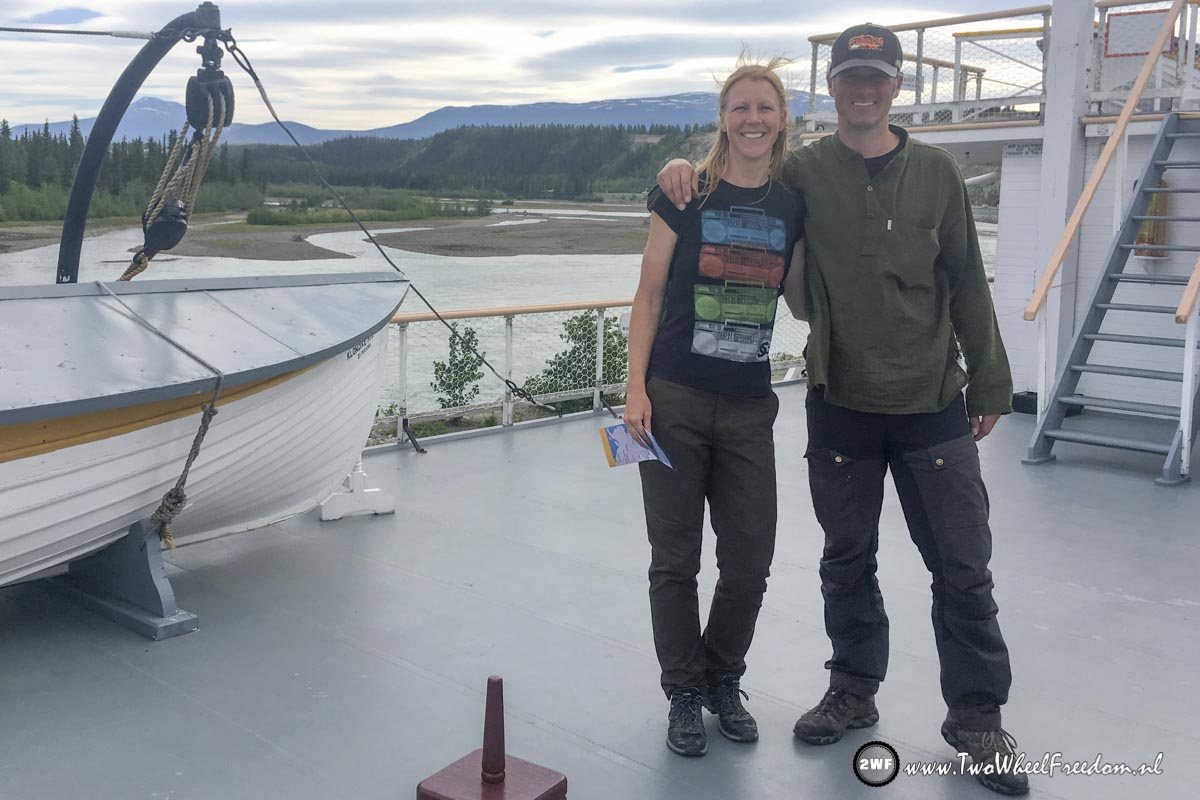 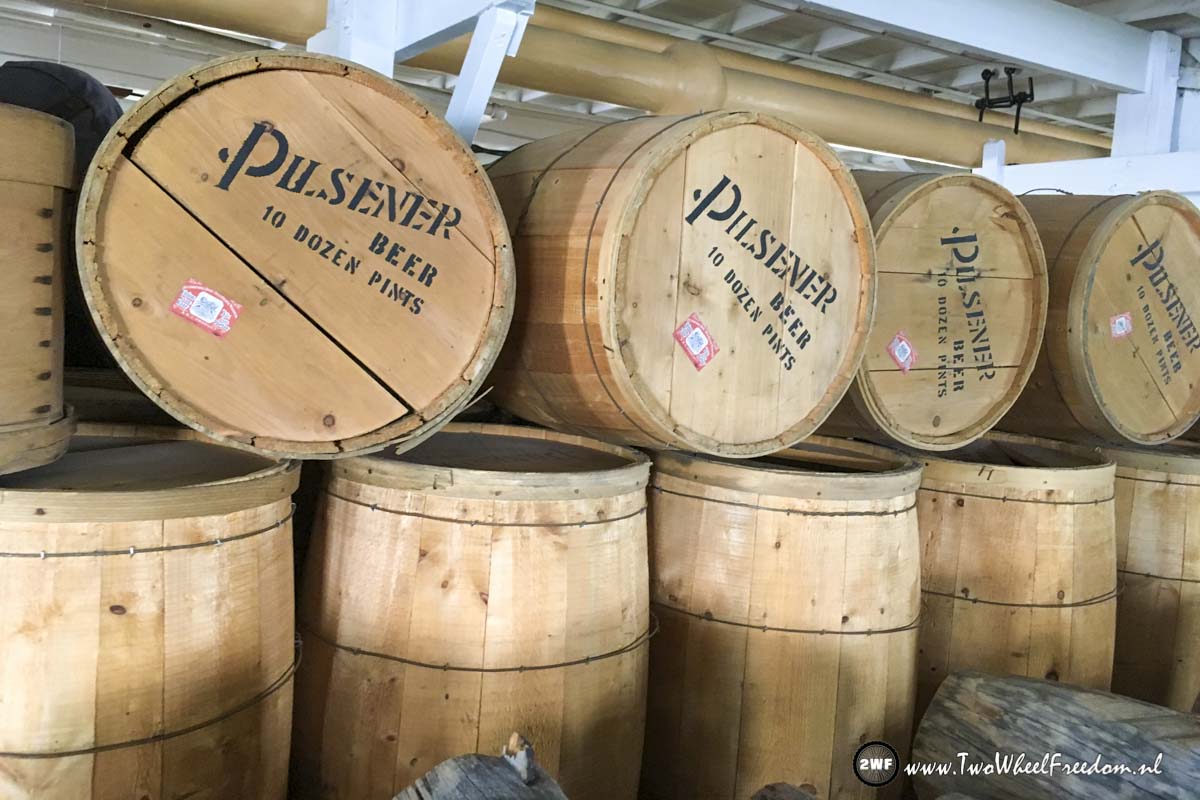 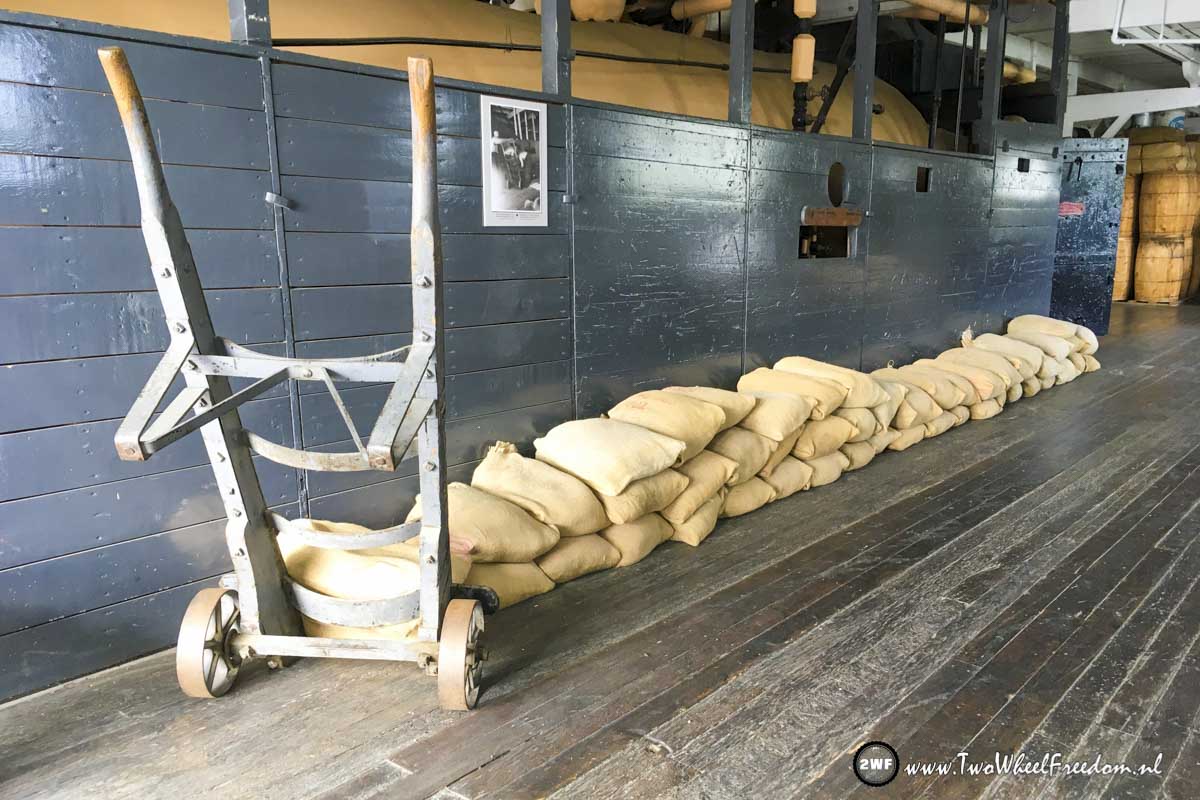 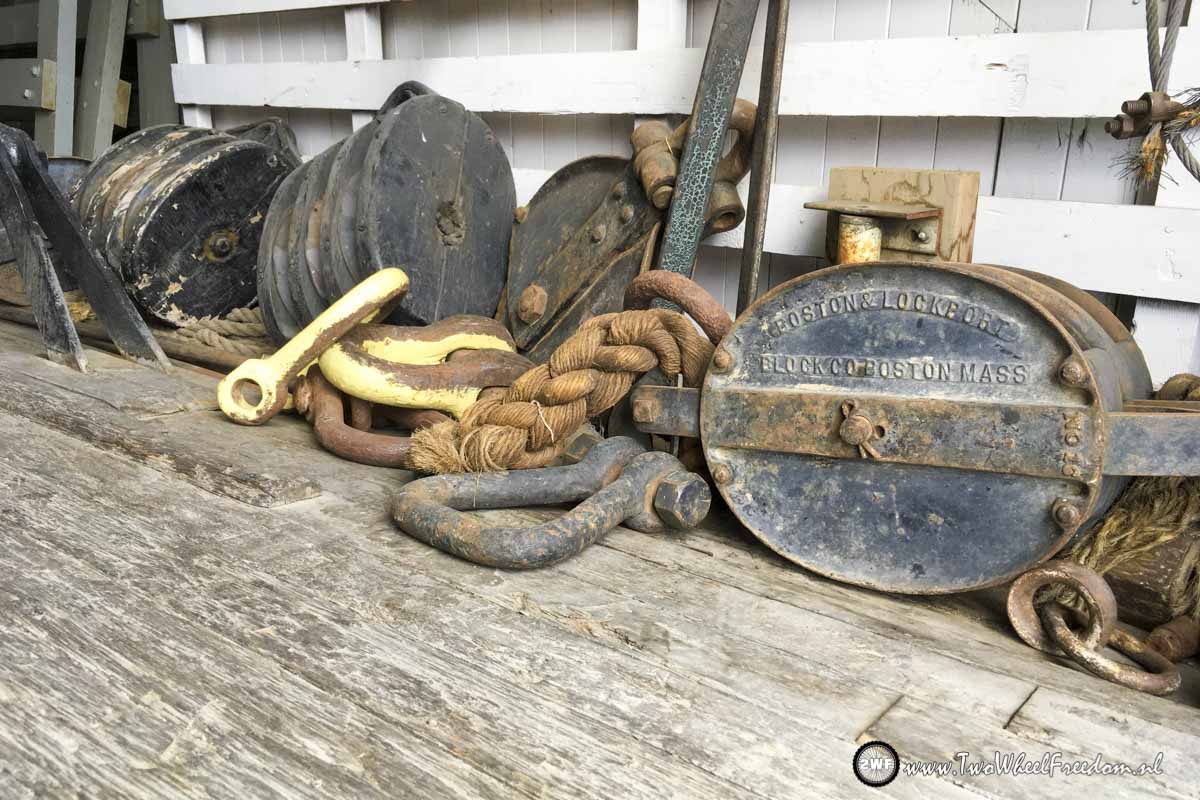 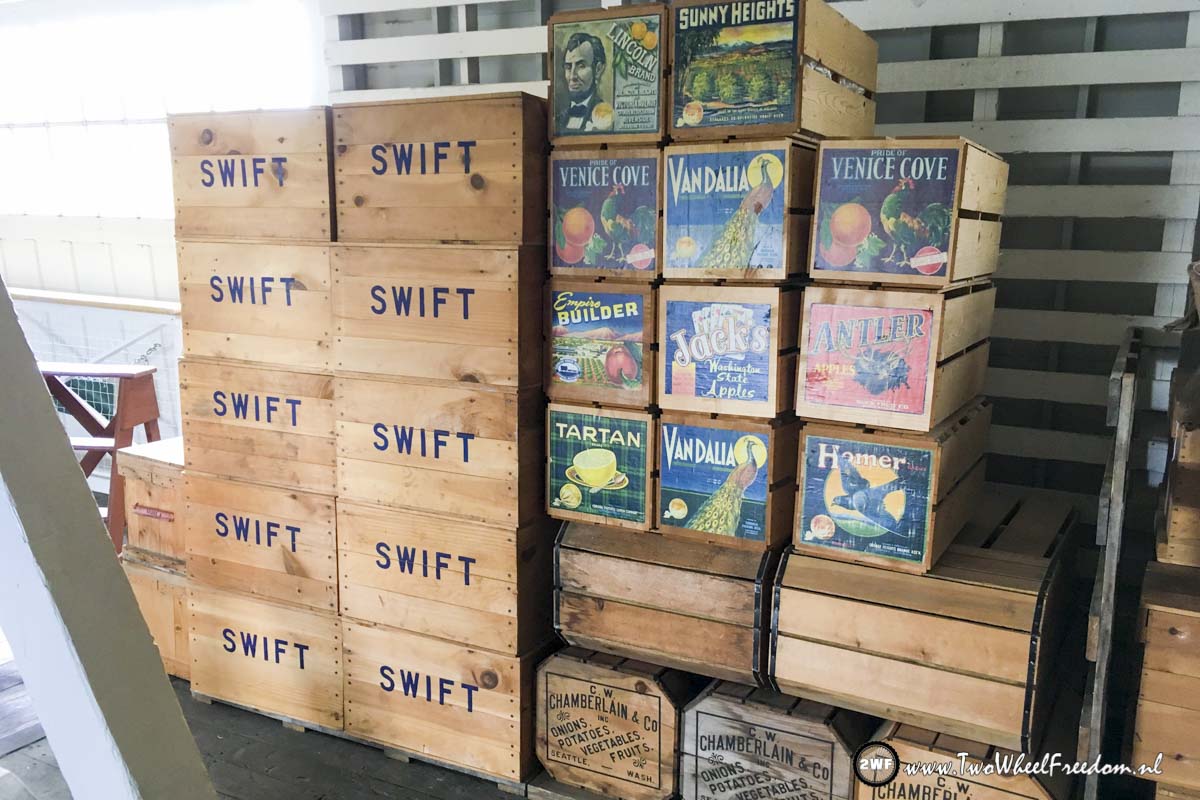 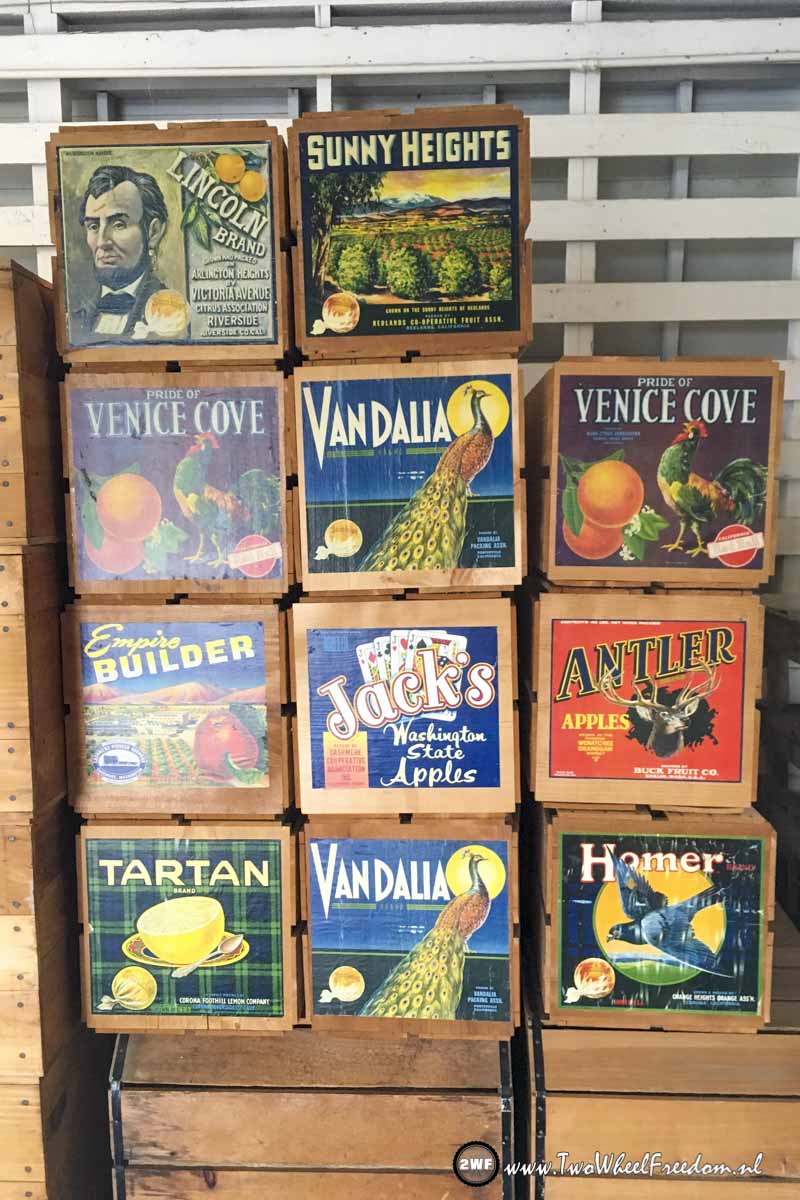 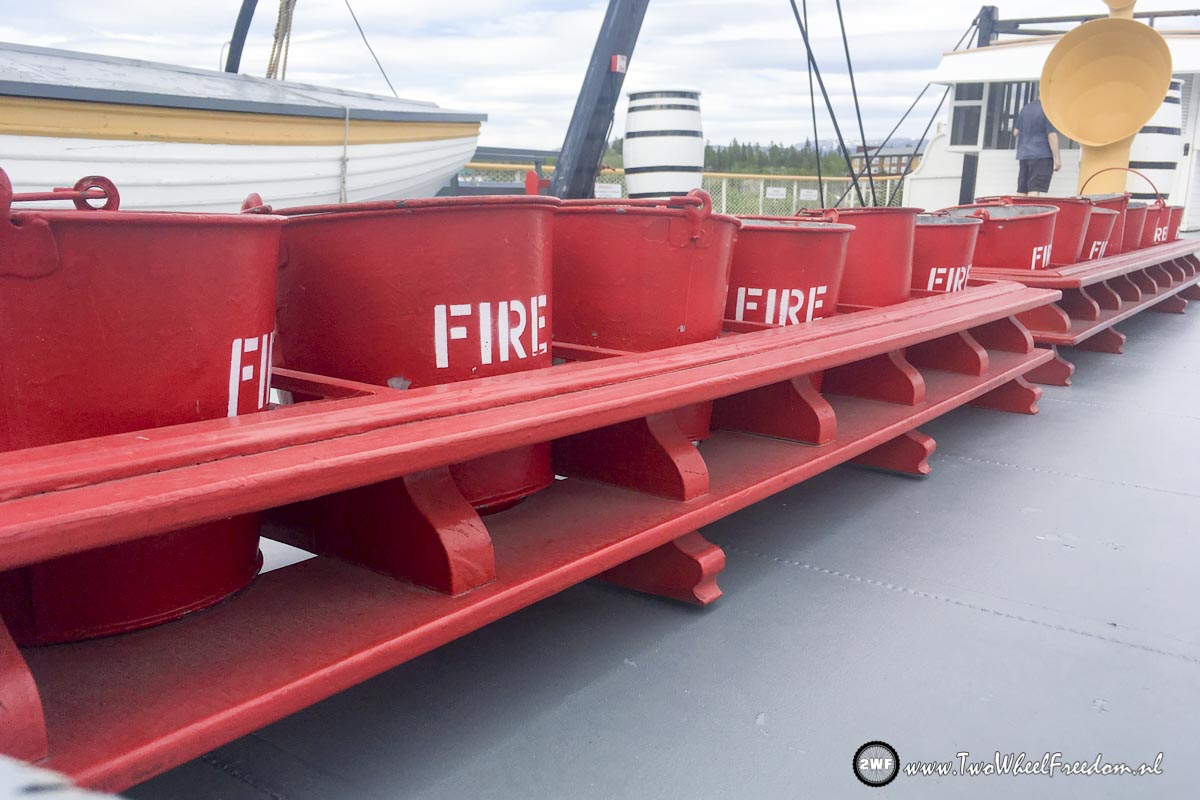 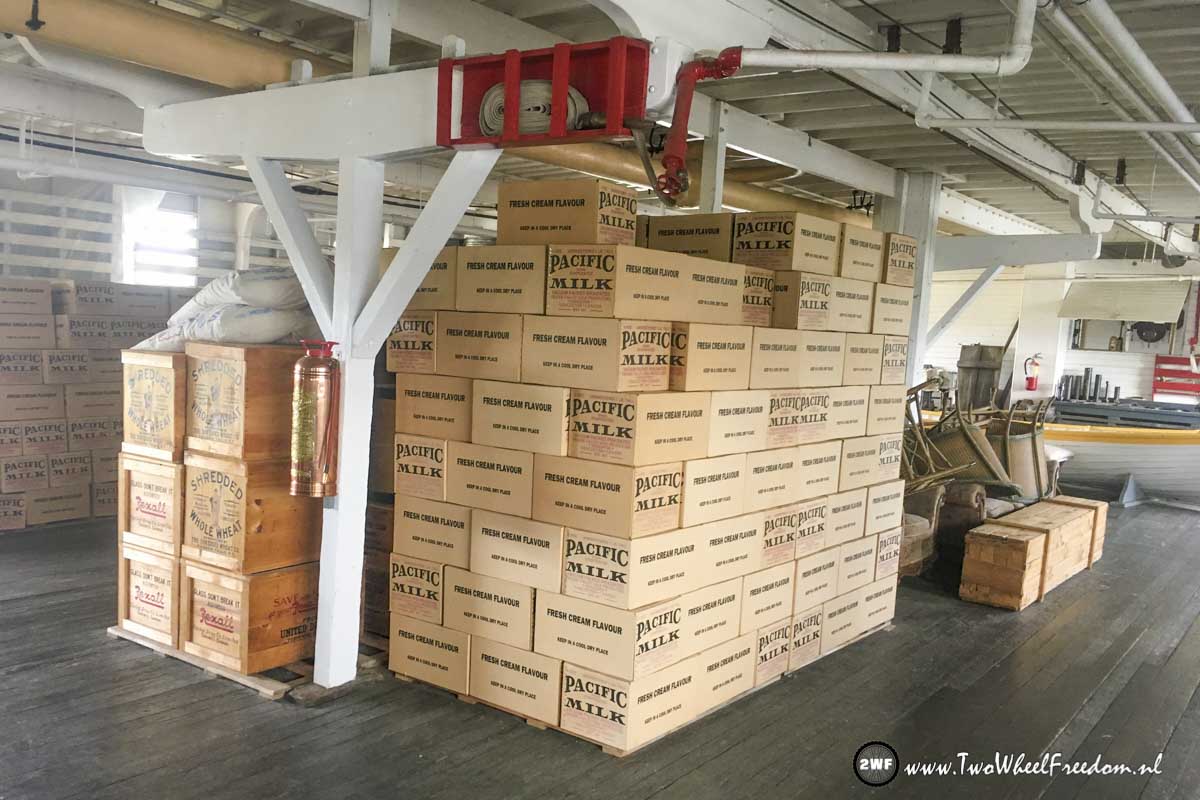 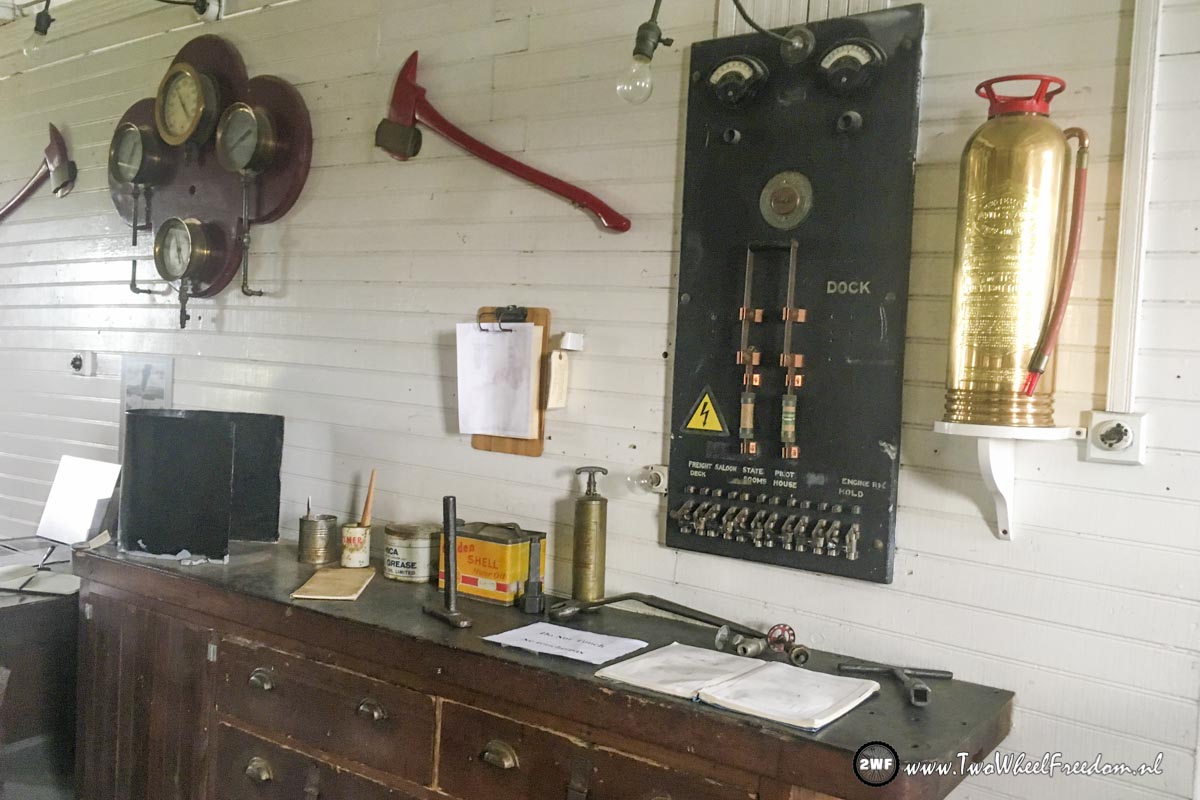 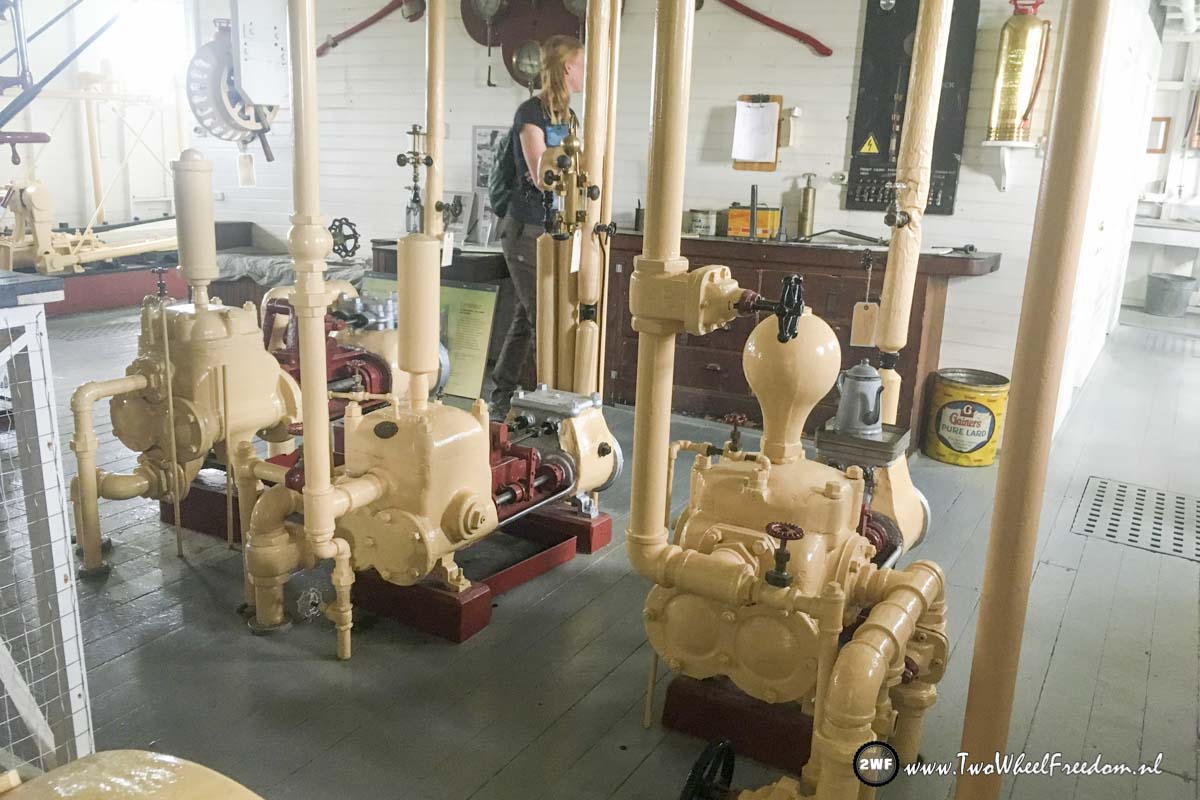 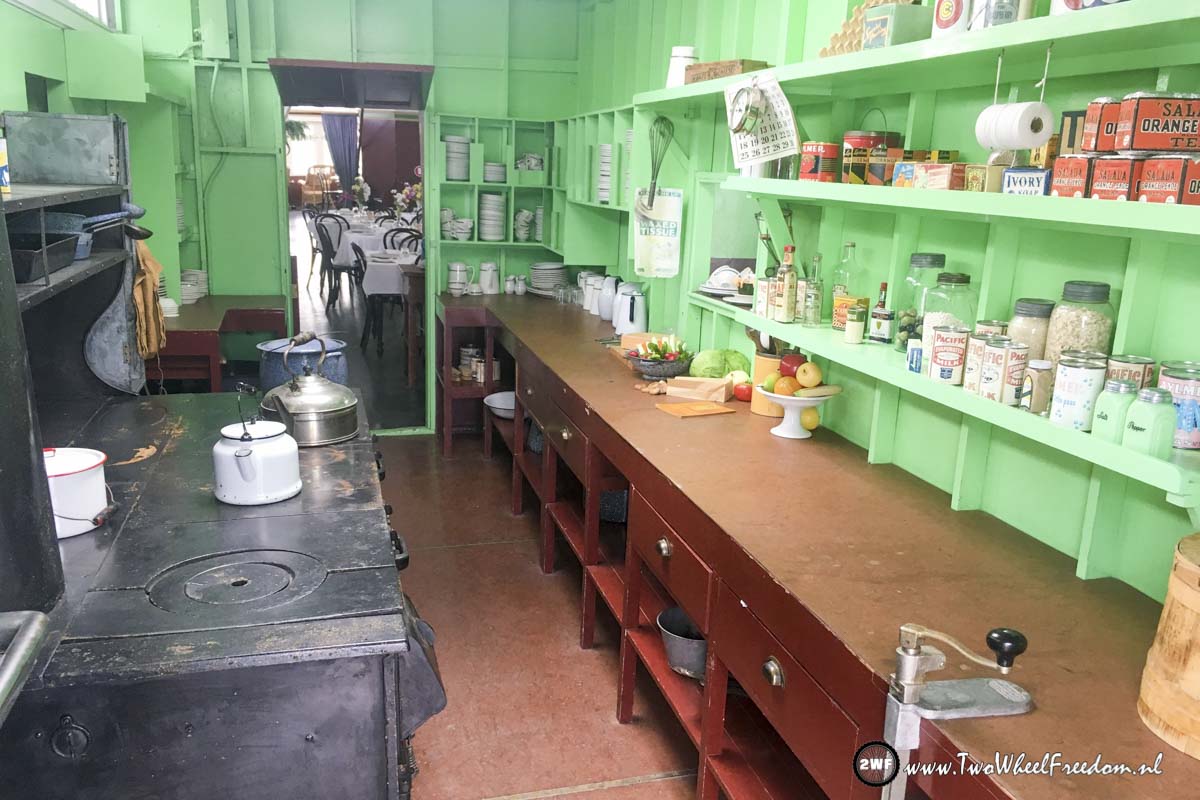 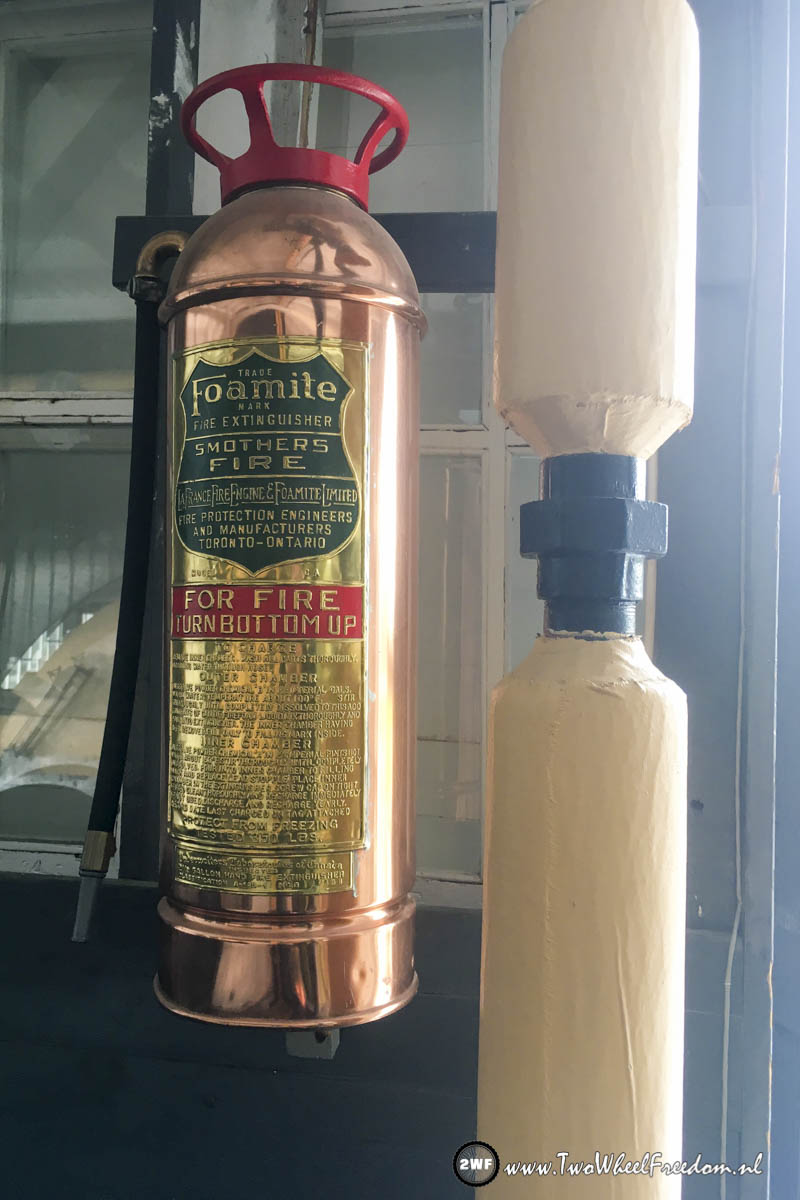 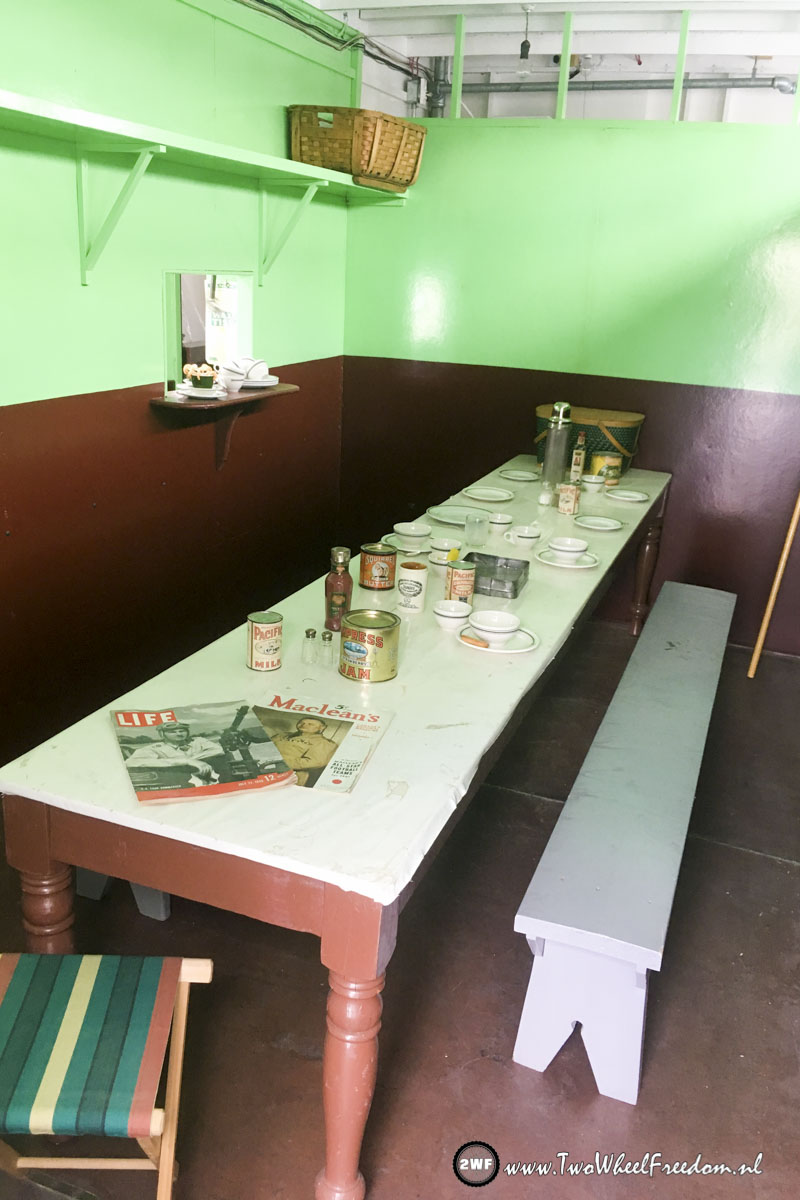 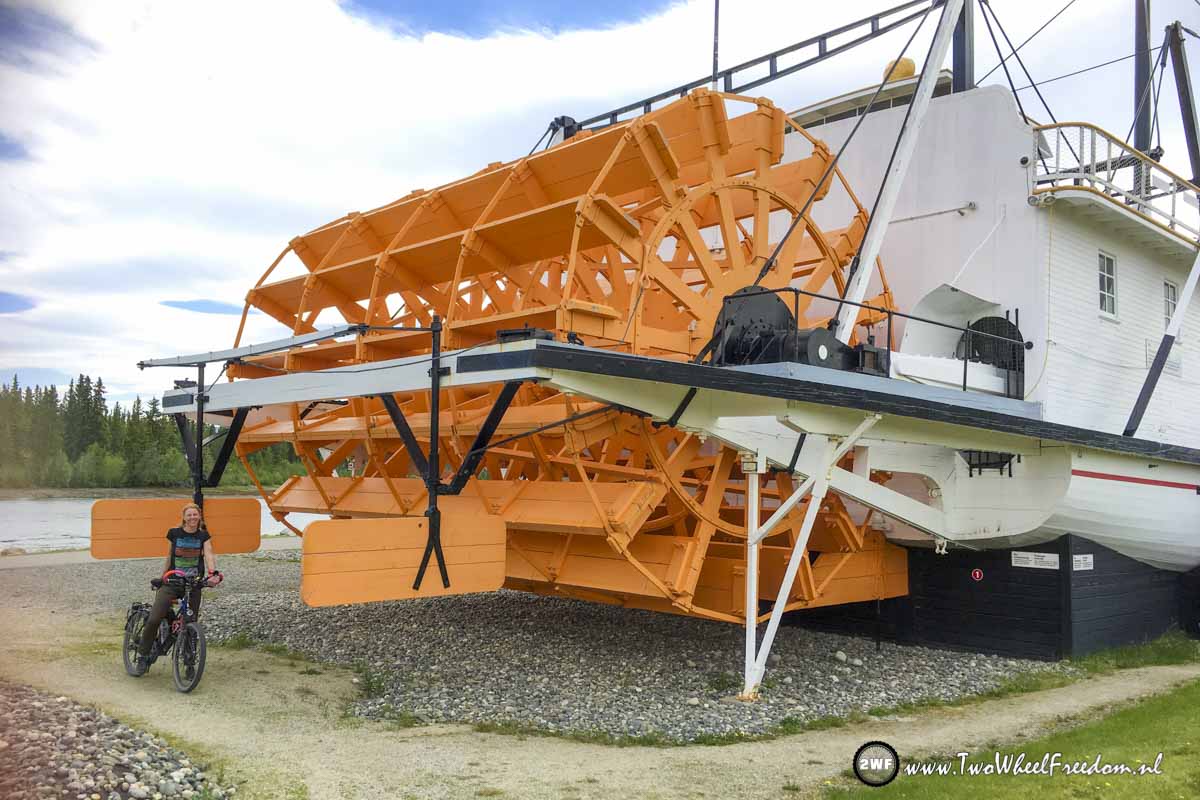 It is time to go back to the coffeehouse “Midnight Sun Coffee Roasters”. Because we didn’t eat lunch we order coffee and tea and a nice homemade cookie to go with it. We cannot stay too long because for the coffeehouse it’s almost closing time. 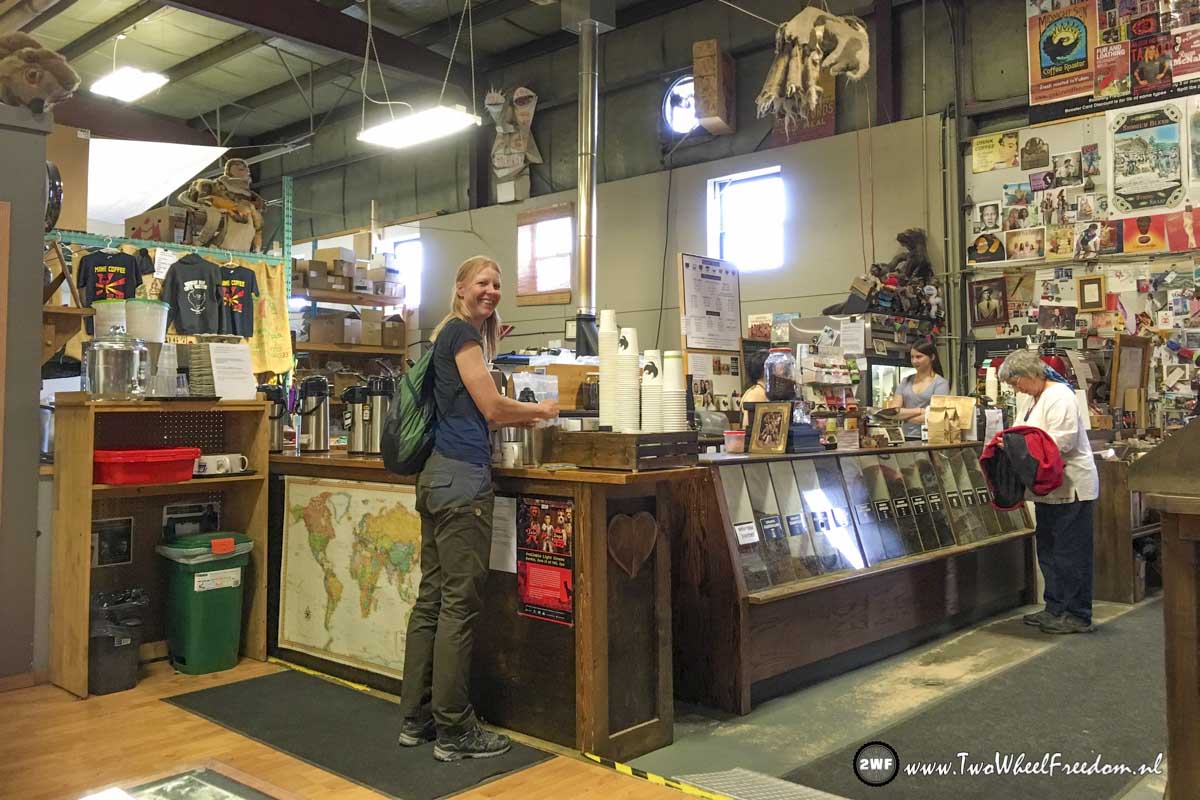 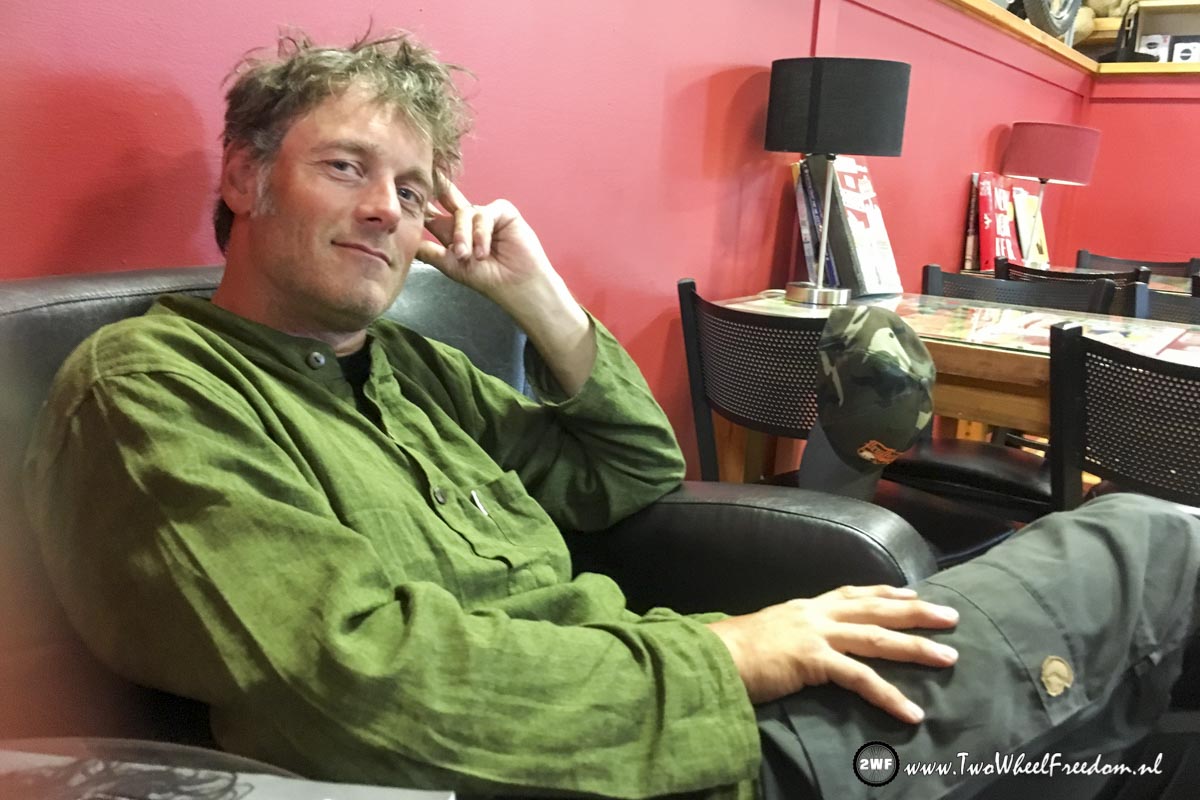 But that’s okay because we should be getting some groceries at the supermarket anyway.
Arjan is going to cook a nice dinner for Jeanette and ourselves again.
He makes us potato’s from the oven with broccoli and topical Dutch meatballs!
We enjoy our last evening together. 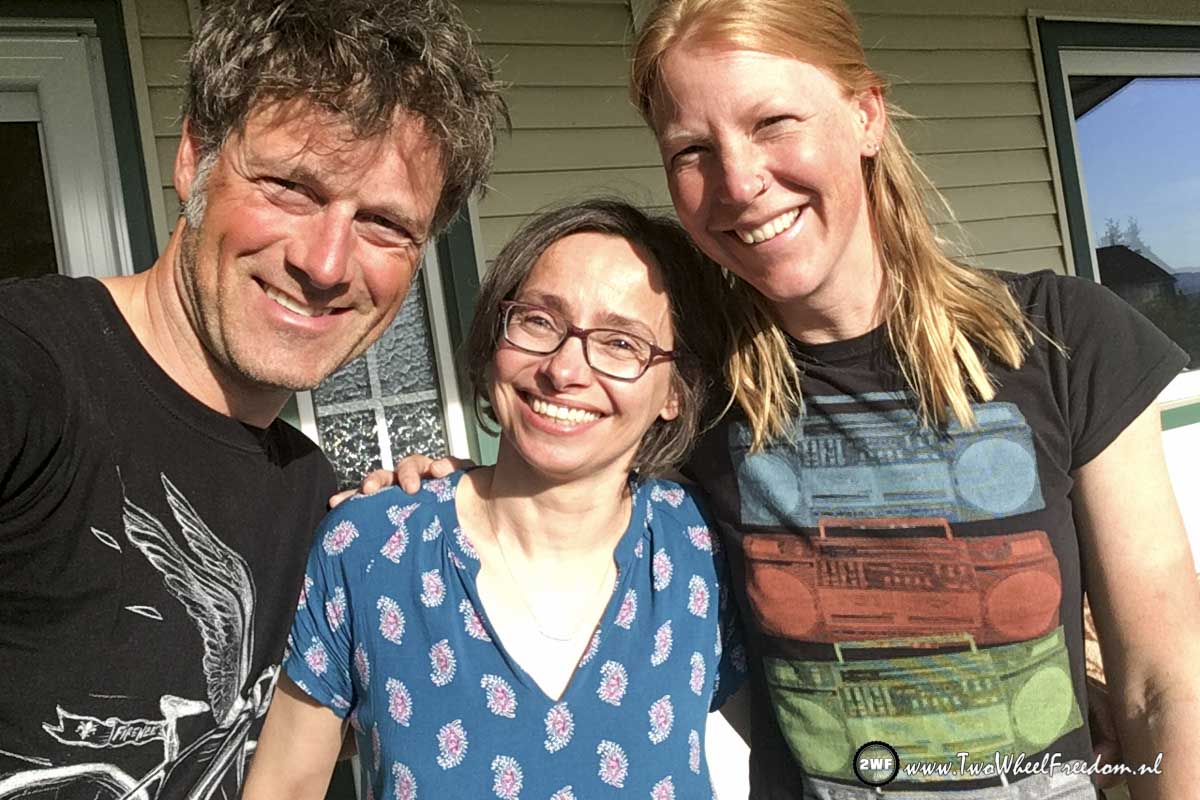 Thanks for the great time staying at your place Jeanette!!![/caption]